This indicates the pavement condition for this treatment.

Learn about the benefits of Rejuvenating Fog Seal Treatments

Roads break down over time, but eFog, a rejuvenating fog seal developed by Ergon Asphalt & Emulsions, can delay that process. eFog contains a proven rejuvenator and a polymer-modified asphalt base that provides a denser film thickness for increased durability and resistance to tracking.

At an average cost of $0.50 per square yard, eFog is a cost-effective way to extend the life of a roadway by roughly 2-3 years.

A conventional fog seal should not be used on surfaces with low friction resistance and should be used with caution on surfaces carrying traffic over 35mph.

According to a study completed by the Federal Highway Administration entitled “Prevention is the Cure,” the use of fog seals is an easy and cost-effective way to delay roadway breakdowns and further postpone major construction. 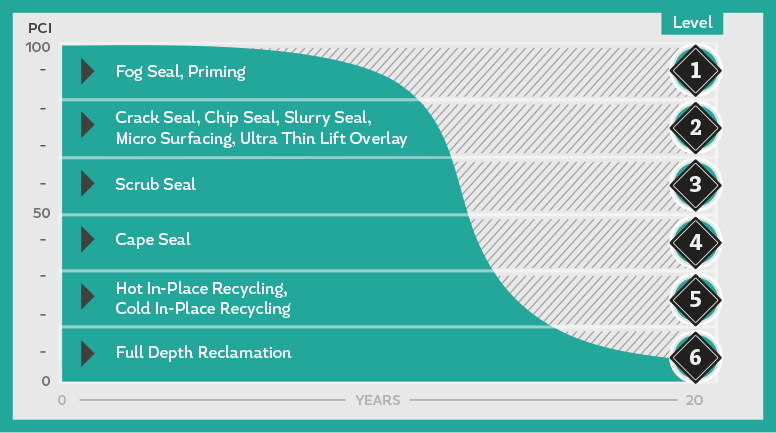 The chart above shows the corresponding treatment types suited for roads at each stage of pavement degradation over 20 years. Each stage is categorized with a Pavement Condition Index.